I have always been keen on learning the local language wherever I found myself. At least, I would try. Now in South Africa, one is faced with no less than 11 official languages. Which one should I learn? Maybe I can skip English all right. Remains 10…

That is one issue. Another one is, how those languages are spread over the country. If only I could choose the one that is spoken locally, I’d be content with that. While this could make sense in provinves like KwaZulu-Natal (predominantly Zulu) or the Western Cape (Afrikaans and some Xhosa), in the most populous and urbanized province of Gauteng where I stay, this is another matter. Here, the whole of South Africa meets. 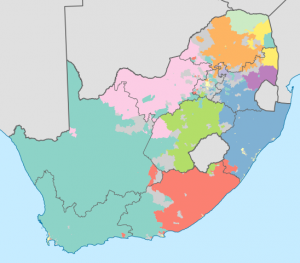 Can you spot Gauteng? Perhaps the smallest province, but with drops of all colours in it.

In townships, people seem to mix those languages. I know of one township whose name, Soshanguve (north of Pretoria), explicitely roots from a gathering of all indigenous populations (a political will of ruling over people’s habitat at the time) : Sotho – Shangani –Nguni – Venda.

The mish-mash of languages spoken in Gauteng, between Johannesburg and Pretoria is often associated with Tsotsitaal, the slang or street lingo. From what I understand, tsotsi is a Zulu word for a ‘thug’, and taal is Afrikaans for ‘language’.

Now you would think that would make perfect sense for me to pick tsotsitaal over all the other. I will hopefully catch some of it anyway, but I wanted to try and learn some language I could use for NLP. Back in 2000, I had caught a few words of Afrikaans and Pedi, which is the closest you can get to ‘local language’ in Pretoria. This time, motivated by both the easiness of learning the most widely understood autochtonous language and some already existing NLP work, I am focusing on Zulu instead. I found out that whenever Black students were meeting, of different language groups, Zulu was the one they would switch to. Alright, I would still love to get some Pedi or even Venda (apparently speaking Venda qualifies you as a language genius here, while many claim to speak at least six of the official languages or… all of them), I would love to praat Afrikaans but hey, let me start somewhere.

Initially, I bought a book, did not find it very useful. I lent it to a Zulu friend of mine for inspection, and I have not seen it since then. Actually, it does not matter much. I’m getting an almost daily dose of Zulu through memrise (the free version, see below). Or I watch Dingani’s videos directly on Youtube.

I still can’t do much more than greeting and thanking people, bidding farewell in a polite manner or say something like : “the boy sees the dog” (umfana ubona inja). But I’m keeping up and hopefully soon I’ll be able to grasp the Zulu lyrics in that Johhnny Clegg’s song I heard in childhood. Or in the maskandi blues-like Zulu music.